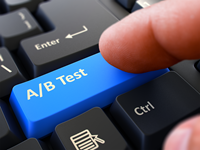 I have been following a recent discussion by the Only Influencers membership around how adopting new technology - or even fully using the existing functionality available to you - can be a challenge. Something I am sure many of you reading this would also testify to.

The percentage of users who fully utilize the capabilities of their existing tech is very low indeed, something most technology providers find very frustrating indeed. Take Subject Line (SL) Testing, no one out there would argue it isn’t worth the effort, yet very few people test SLs as often as they should. Even when they have a SL Tool like Touchstone, which uses AI and past campaign data to identify winning SLs or the A/B testing capabilities of ESPs to send out a test to a sample of the list before deploying the campaign, SL testing is hard work.

Leaving aside some of the more technical aspects of testing, such as making sure the sample size is statistically significant, just deciding what to test can be daunting. So for this article, I thought I would share some tips on what to test that Team Alchemy Worx use to ensure clients Open Rates are as good as they could be every time we send an email.

Every Subject Line that goes out the door should be tested. Ideally it will be an ABCD (or more) test and never less than ABC. To do that it is important to have a good sense what you want to test and plan ahead. Remember more variants = Better results. A plan that lays out the variables you want to test and when you test them will not only save you time when it comes to writing your subject line – you’ll already know your content and how you’re going to approach it, it will give you better results.

What you should test.

A lot of advice tells you SLs should aim to be around 35 characters and unfortunately most people – whether they know it or not -- seem be following that advice. Looking at the past campaign data contained in Touchstone, we found 63% of subject lines that are sent are between 20 and 65 characters in length.

What may come as a surprise to you is SLs of that length tend to underperform! 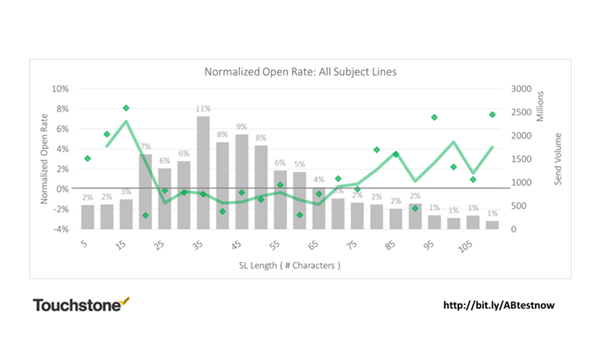 2. Test CTAs in your Subject Lines

Although one of the key aspects of successful copywriting is telling readers what they need to do, this is often overlooked in SLs, where your focus is often trying to catch attention rather than drive action. We found for one client that telling subscribers what to do by including a direct CTA helped to boost engagement. So rather than just saying ‘Summer Sale’ it became ‘Summer Sale – take a look at the latest offers in store and online’.

We’ve written before that using original words in subject lines can boost click rate by 34%, yet less than a third of subject lines feature original words. Try using a thesaurus or taking inspiration from the dictionary definition to change some of your most-used words.

While first name personalization is very common now, it can still have an effect if you don’t overuse it. Look at available data fields to see what other personalization you can include in the SL – such as surnames, recent purchases or locations including a city name can perform well, for example.

We find that being reactive and riding on the back of current events is a great way of boosting response but the lift often doesn’t last for long because other brands jump on the bandwagon. The email itself doesn’t have to be themed, as long as your SL makes sense and doesn’t mislead. For example, as this is a World Cup Year, you could either go with the flow: ‘Celebrate the World Cup! 10 Awesome Travel offers for you.’ Or against: ‘Escape from the World Cup! 10 awesome things to do this December.’

Emoji can be used in 3 different ways  syntactic (as punctuation), lexical (to replace a word) and illustrative (as a decorative or design element). It’s a useful framework that can help you test them effectively and strategically.

Within a brand voice there is still a lot of room for variation in tone – for example in the difference between a promotional email and a service email. Try mixing them up where appropriate – so rather than ‘Hurry - check out our latest events’ you might try ‘We wanted to let you know about our latest events’. But remember it’s about subtly changing the tone, not misleading customers.

One of the first things you learn about copywriting is to use ‘you’ more than ‘we’. But ‘we’ and ‘our’ can be effective if your customer trusts your brand and sees you as an authority. Try positioning your subject line from both points of view and see which is more effective, for example instead of ‘Top picks for you’ you might try ‘Top picks from our team’.

Punctuation and separators do make a difference and have a real effect on open and click rates, but the best results come if they are rotated. For example using an ‘!’ for emphasis or ‘|’ to separate the different propositions within your subject line will only give a lift for a short period of time after which open and click rates will fall back to or even below average. So a once and done test strategy will end in failure.

Remember as this case study shows regular subject line testing delivers an average Open Rate lift of 14%. Think what that would do to your bottom line.

More posts from author
Monday, 20 April 2020 COVID-19 or Coronavirus -- which performs better in subject lines?
Monday, 24 February 2020 Test your way to better Open Rates
Wednesday, 04 December 2019 Case Study: What is an Email Address Worth and How to Increase Its Value by 176%
Wednesday, 16 October 2019 Quist: The word Halloween in Subject Lines is Bad for Open Rates – Spooky
Wednesday, 31 July 2019 Quist: Powerful Email Reactivation Hack Anyone Can Use